Composer and performer Molly Joyce’s music has been described as one of “serene power” (New York Times), written to “superb effect” (The Wire), and “impassioned” (The Washington Post). Her works have been commissioned and performed by ensembles including the New World, New York Youth, Pittsburgh, Albany, and Milwaukee Symphony Orchestras, and the New Juilliard, Decoda, and Contemporaneous ensembles. Additionally, her work has been presented at TEDxMidAtlantic, Bang on a Can Marathon, Gaudeamus Muziekweek, Classical:NEXT, VisionIntoArt’s FERUS Festival, and featured in outlets such as Pitchfork, Red Bull Radio, WNYC’s New Sounds, I Care If You Listen, and National Sawdust Log.

Her work is primarily concerned with disability as a creative source. She has an impaired left hand due to a previous car accident, and the primary vehicle in her pursuit is her electric vintage toy organ, an instrument she bought on eBay which suits her body and allows her to engage with disability on a compositional and performative level. Related engagements include speaking/performing at TEDxMidAtlantic and National Gallery of Art in Washington, DC, as well as writing for publications 21CM and Disability Arts Online.

Her debut EP, Lean Back and Release, was released in January 2017 on New Amsterdam Records to much acclaim. Featuring violinists Monica Germino and Adrianna Mateo, the EP was praised as “energetic, heady and blisteringly emotive” by Paste Magazine and “arresting” by Textura. Additionally, Molly’s music has been included on solo albums from pianist Vicky Chow, cellist Nick Photinos, both on New Amsterdam Records, and on pianist Brianna Matzke and violinist Hajnal Pivnick’s duo album On Behalf.

Molly is a graduate of The Juilliard School (graduating with scholastic distinction), Royal Conservatory in The Hague (recipient of the Frank Huntington Beebe Fund Grant), and Yale School of Music. She is an alumnus of the National YoungArts Foundation, and has studied with Samuel Adler, Martin Bresnick, Guus Janssen, David Lang, Hannah Lash, Missy Mazzoli, Martijn Padding, and Christopher Theofanidis.

“During Monday’s 20-minute set, the addition of Ms. Joyce’s vocals made me eager to hear a full song cycle of similar material. Another hint of this performance style’s serene power can be heard on an excerpt, posted on Soundcloud, from her collaboration with the percussionist Jop Schellekens.”

“These two artists treat disability as creative opportunity. In ‘Breaking and Entering,’ they explore their struggles and their transformations together—Joyce with ethereal vocals and an electric toy organ, Herman with his body in motion.”

Alyssa Kayser-Hirsh, I Care If You Listen

Created in collaboration with Olga Stucker, Left and Right seeks the intersection of language, performance, and video to embody and explore physical immobility.

Created in collaboration with Maya Smira, The End illuminates loss of physicality through video, music, and lyrical language. The music is inspired by German singer-songwriter Nico's cover of the classic song from The Doors, and expands to a multi-layered voice and vintage toy organ recording. The work reckons with loss of physical sensation and movement, intersecting with multiple camera angles to focus on physical difference and disability. 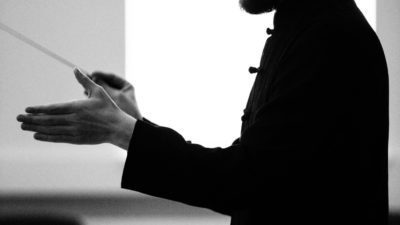 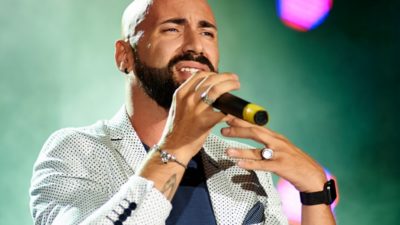 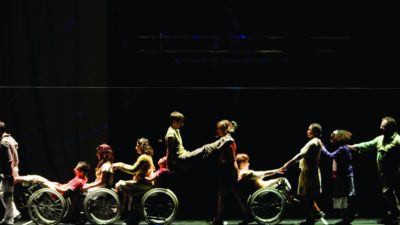 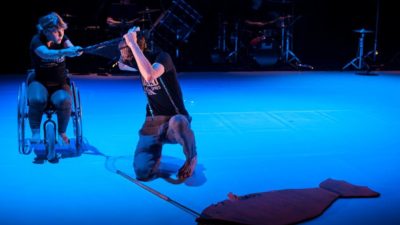