A photograph from Cracking Up by Sean Burn depicting a man in glasses, holding a walnut and staring at it intently.

A photograph from Depression Hurdle by Sean Burn depicting a man crawling under a small hurdle. He is wearing a bright purple and red jacket.

artist immersed in a wide variety of art-forms, whose work continues to defy pigeon-holing crossing visual, performance, literary and digital art forms with ease and uncomforting elegance. An abiding concern within his work is the disconnect between hierarchy and human rights. Often playful to the point of frivolous, as in his series of work that ‘may contain nuts,’ he is also capable of writing and producing arresting theatre that cuts to the quick. disability arts online

the antithesis of all that is mass-produced, commercial; one needs time to engage and to listen to the work. It might even help us to listen to ourselves. Indeed, the work is deeply personal and perhaps gobscure does allow us to start to ‘get to know him’ through his work. He exemplifies the idea of a self-taught artist, while being far from an outsider artist, as he is so incredibly well-read and knowledgeable. Notably, this does not render his work in anyway over-intellectualised. Instead, there is a democratic essence in his practice in the way that it is available to all through the websites vimeo and creative commons.

1981 c.e. con party wear hang nelson mandela badges while their hardest-right government savagely cut, hatecore press chums lapping this up alongside race-hate, riots, terrorists & a royal wedding. ... & playground chants ov spaz change to joey cos joey deacon who lived with cerebral palsy appears on blue peter. friend plays stiff little fingers loud, wears dm's with red laces & day after deacon appears on t.v. declare they are now to be called joey she-he - reclamations still blowing our minds tho they do runner that day. this play then spirals out of this and into better possible futures to ask how we want to live now

Extra information: further r&d autumn 2018 - joey will be available for touring from 2019

Freight details: currently working on this - please ask for info

Description: with an austerity crutch (only one, apparently hard-working families demanded it) & coal from newcastle this spokenword show examines erasures of memories to discover poetic truths - remembering now more urgent than ever. inspired by one of our closest friends who was taught by her tyneside miner-dad before world war two : ‘never speak with yr mouth-half full. fill it first & then speak for greatest effect.’

Duration: visual arts exhibition plus performance of around 45 minutes

Description: still alone in her voices is a haunting visual exhibition spiralling out some our experiences living with psychosis. at its core are twelve large white-painted wooden panels (80cm x 80cm each) weighty yet fragile are covered in layers of charcoal writing - languages you can 'see' but cannot 'read'. putty-rubber erasings make fragile fragments of poem across these panels. made anew for each venue as we are constantly being erased & having to write ourselves back in. premièred thanks to the mental health collective newcastle, toured to arc stockton, isps liverpool, adf, belfast, in print form is part of our solo show at alma zevi venice

Extra information: complimenting this is a spokenword performance - tree from throat & spine. based on cycle ov poems from one ov our three full-length collections these poems spiral out of our worst sectioning and combine with visual poetry, creative resistances and genuine art prizes to 'reclaim the languages of lunacy' creatively, asking who 'owns' our story & inviting all to reclaim language & build mad solidarities at a time of so much warring against us all

gobscure’s production of Sean Burn’s Collector of Tears is that rare bird. It’s a flawless fusion of writing, performance, design and lighting, which led, not to a whooping standing ovation of the kind we have become very familiar with over recent years, but to heartfelt applause and comments such as “That was beautiful” and “One of the best plays I’ve seen in years”. british theatre guide, 2014 & subsequently chosen by them as north-east play of the year

Seldom does it occur that a theatre production has such a profound effect on me as Collector of Tears has had. The epic story of Sunderland-born Tanya Sealt (Madeleine MacMahon) chronicles the personal journey of a woman who is unable to cry – and, consequently, age and die until she does – set against the backdrop of four hundred years of radical English history. A powerhouse performance from MacMahon, deft direction from Jackie Fielding, and a beautifully poetic script by Sean Burn combine to ensure that Collector of Tears is a production of monumental stature. This fascinating and compelling Collector of Tears is a stirring, thought-provoking and uplifting piece of theatre. Steve Burbridge, uk theatre net, 2014.

As part of their The Shape Of Things To Come programme, Camden Peoples’ Theatre recently supported a workshop and a work-in-progress of Joey from gobscure – associate artist with Greyscale.

The language is dense, rhythmical, it jars and spasms with passion – a poetic outpouring. The use of assonance, alliteration and dissonance put me in mind of Caryl Churchill’s The Skriker. It’s an epic, rebellious rollercoaster of a story that takes us out on the town squealing John Peel banshee, howling under every star.

Now in 2017, Joey would be labelled with Oppositional Defiant Disorder. Back then, in 1981, it was called “asking questions”. Written to the beat of an explosion, Joey asks us to consider our past and our future, with the thought of what can we do to take back control of our destiny.

Scott Turnbull delivers his lines with punch and panache. He and Faye Alvi are brother and sister committed to the text and to each other’s performance. Joey will be gobscure’s first full-length play since the award-winning Collector of Tears. I for one, can’t wait to see it fully developed. 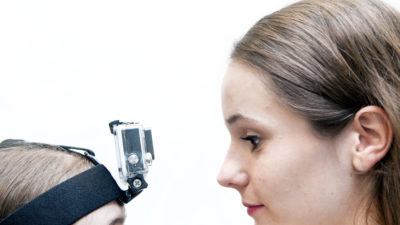 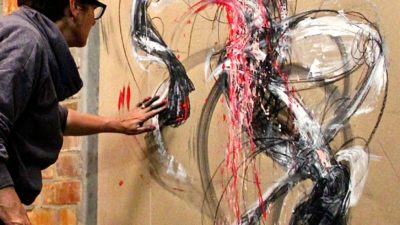