With the support of Stopgap Dance Company, Chris Pavia has realised a lifelong ambition to become a choreographer. In an exclusive interview with Colin Hambrook focusing on Chris’s professional development, the dancer/ choreographer explains the journey he has taken since first joining the company as a trainee in 1997.

Chris Pavia became a full-time professional dancer in 2000  and  has toured nationally and internationally in several major Stopgap productions, whilst simultaneously developing choreography skills. Most recently Chris choreographed The Awakening for Stopgap – the first professional work made for national touring by a choreographer with Downs Syndrome.

Every new experience with Stopgap has given Chris the impetus to develop his understanding of technique, learning how to devise and choreograph dance using exciting and dynamic methods. He first began devising choreography in 2003 with CGI-Me –  inspired by his fascination with computer-generated imagery and science fantasy films.  In 2007 he went on to co-choreograph Chris et Lucy with Lucy Bennett – a piece influenced by The French New Wave movement of the 1960’s.

In 2008 Chris became the first choreographer with a learning disability to be selected for the emerging choreographers’ platform Resolution, produced by The Place in London. It was an important moment in Chris’s career and also for Stopgap, putting the company’s professional development methods firmly on the map. His solo piece for Resolution, Statues of Darkness was a striking work based on the impact of Saddam Hussein’s statue being pulled down in the aftermath of the Iraq war:

“Statues of Darkness was based on the image of all the wreckage left behind. I worked with the sound effects of gravel and stones… so the way I moved mirrored the movement of every shattered stone being dragged around.”

In 2010 Chris was set the challenge of choreographing a duet for two dancers. Shadowed Voices was inspired by the imagery of forests and the landscape based on the idea of trees whispering in the wind. The opportunity led to Captured by the Dark – a piece reflecting Chris’s love of science fantasy – containing repetitive movement that signify the two characters trying to find a way to move forwards in time:

“Captured by the Dark was based on the idea of time being reversed, time looping and my characters getting trapped in their childhood. The dancers had to establish how to get to the end of a section of movement and combine bits of time to bring them back to linear time.”

Chris worked with a composer for the first time during the creation of Captured by the Dark to enhance the dancers characterization. Sound effects echoed loss of momentum and the idea of teleportation and of his characters being brainwashed:

“We used a lot of brainwashing sound effects in the music. I wanted to get one of the dancers I was working with, Tomos to express an emotion behind having his thoughts controlled by someone else’s mind. He resists, but it’s like he has no power and has to work out how to overcome the effect of being controlled.”

“The trademark for Chris’s choreography is the use of unusual duets and lifts that give the work originality and distinction. Chris has been influenced by the work of choreographers Thomas Noone and Rob Tannion both of whom he has worked with. From Noone he has learnt how to get the dancers to amplify specific movements – putting sequences under a microscope for emphasis. Likewise from Tannion he has picked up the use of textured imagery as a source for creating dramatic sequences of movement.”

“Rob influenced me hugely. He really tested me. There was a dance piece called Splinter where I had to have Lucy standing on my chest walking on my back and doing a headstand on my stomach. It was one of the hardest pieces of movement I’ve ever had to do. I had to be upside down in a dog position and I had to try and walk like a stag beetle.”

Chris’s biggest achievement to date has been The Awakening, which has been touring festivals and outdoor spaces since summer 2014. The vision behind the piece draws from his love of science fantasy films, evoking a complex landscape based on the idea of light and dark as both opposing and complementary forces. Chris cites the memory of waking up to electric power cuts when he was very young as having an influence on themes within the piece. The experience was accompanied by feelings of fear but also of intrigue:

“As you move towards light, so the shadows behind you become stronger, but shadow can also destroy light. Equally if you’re in darkness everything can start to glow as you adjust to the lack of light. I wanted to convey the feeling you get when you wake up suddenly and you don’t know where you are. It’s like when there’s a blackout on stage and you think ‘what can we explore before the light comes on? Let’s see if I can reach the ground? How does it feel in the darkness?’”

“Hannah Sampson is the light in The Awakening. She has control of light. I gave her the idea of being electric asking her to make movement that looks like lots of electricity coming out of her body. Her movement represents light and its affect on the other dancers as they transition from the dark and into the light. And so there is a lot of tension and aggression as the two other dancers struggle in the dark but equally don’t want to be controlled by the light.”

Chris worked with new techniques for The Awakening to convey his ideas for his dancers. At the beginning of the process he instructed them to use a series of single evocative words to explore and try out different movements: ‘pulled’, ‘crumbled’, ‘tangled’, ‘gravity’ became the starting point for movements that were then combined into mini-duets.

He also learnt to use a scrapbook to put down a series of images with accompanying words to evoke the storyline and the atmosphere he wanted to convey:

“I do a lot of research beforehand. I write down the ideas and put words and images into a scrapbook then I make the story with the dancers using the words and the images.”

“Using mood boards I began to map my ideas and to go from one chapter to the next to create a beginning, middle and end for the story. I had to divide every scene into primary and secondary images. I got a lot of feedback from the dancers Hannah, Dan, Amy and Tomos. We worked collaboratively to find solutions whenever bits were not working properly.”

“Lucy Bennett helped me pull The Awakening together. I couldn’t keep all the material we created and her main job as choreographic coach was to help me to decide which bits to use. Lucy and I would write down each chapter for the piece. We divided the scenes and played with what to keep and what to discard.”

Sho Shibata adds: “It was a very visual way of consulting, using words to evoke imagery. Each scene was given a code with a visual element to it.”

Film has been an important medium for Chris’s development as a choreographer. He cites the imagery from Sergio Cruz’s short dance for film piece Animalz as exerting an influence on his desire to make dance and some of the imagery for The Awakening:

“Several lads crawl out of the sea and onto rocks. The camera moves close into the waves, so the boys’ movement echoes how you hear the sound of the waves. And because you can imagine the rocks falling down around them it creates a tension that really clicked with me.”

“With The Awakening I gave the composer the idea of the sound of a heartbeat and asked  him to create a breathing sound to represent the idea of waking up. As Tomos and Amy were  rehearsing a duet for that sequence they began to explore the music and sound effects in  movement.”

The Awakening premiered in Bournemouth and played in Glasgow and Plymouth as part of a national tour. It was chosen by one of the UK’s main Arts venues The Southbank Centre in London to be part of the Unlimited 2014 showcase.

In terms of future projects Chris is looking forward to choreographing his next devised piece based on the idea of space and the planets. It will be a duet and if it all goes to plan the research and development phase of the will begin in November 2016.

Chris’s ambition has been set high by the approach Stopgap has taken to supporting his professional development. At this point in his career he is set on seeing his choreography work staged by the company worldwide. 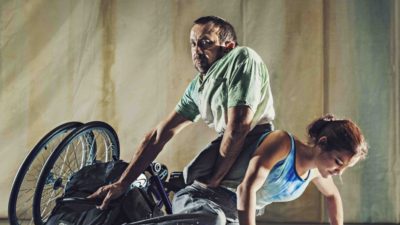 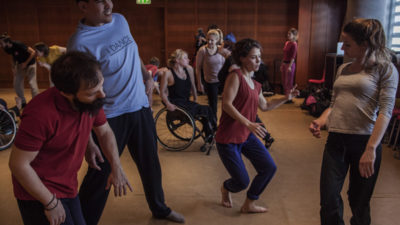 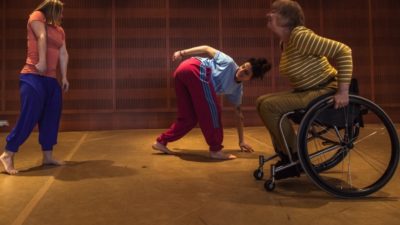 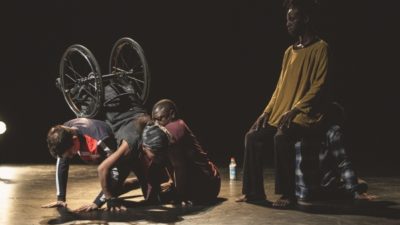