WonYoung Kim is a disability rights lawyer, dance artist and theatre-maker who recently published a new book about law, disability and aesthetics, Defending the Unqualified. Working with Sarah Pickthall, coach, digital dance producer and co-founder (with Jo Verrent) of Sync, the leadership programme working globally, Won shares this overview of arts and disability practice in Korea.

Sarah and Won met as part of the Sync Korea programme in March 2018, one of several programmes part of the UK/Korea Festival of Arts and Disability: Beautiful Differences programmeand described by Sarah as significant set of collaborations, paving the way forward for new creative international conversations on art, disability, aesthetics and disabled leadership.

Won was one of eight Korean disabled artists who took part in Sync, which was co-funded by British Council Korea and the Centre for Disabled Culture and the Arts, I-Eum based in Seoul.

Sarah feels that exploring social constructs and situations disabled communities have faced historically is an important part of any Sync programme working internationally, investigating how art, by and for disabled people, has developed as a way for disabled arts leaders to explore how they might impact on what happens in the future.

According to Won, just like in the UK, the movement for disability art is inextricably linked with the fight for rights of disabled people. The Disability Rights movement in Korea began in the 1980s, and by the 1990s was gathering momentum, ignited by the 1988 Seoul Paralympics, which threw a spotlight on the rights and cultural perspectives of disabled people.

Some of the more prominent early pioneers of the new movement included a theatre company of disabled women called Dancing Back, expressing their experience of discrimination through their work. Just as in the UK, as the movement gained confidence, themes tackled gained complexity and sophistication.

This can be seen, according to Won, by looking at how the movement progressed creatively from the early 00s to the mid-00s; there was a gradual transformation from exploration around the experience of being disabled and the connection to human rights issues, towards identifying new, more complex aesthetic challenges.

The legal context defining rights and empowering institutions also improved: the Act on Discrimination against Disabled Persons was enacted in 2007, and regulations further identifying rights for disabled people as creators and audiences were introduced in the Culture and Arts Act in 2008.

Legal progress notwithstanding, disabled artists in Korea have won public support from central and local government. The Korean Arts Councilsupport disabled artists through a dedicated funding programme, an important facet of the 2008 Culture and Arts Act. The total budget that the central government in Korea provides for arts education, art research and creative support is about £14.5m (2016 figures). From that total budget, I-Eum receives £7.2m. Culture foundations operated by local governments also support disability art; for instance, the Gyeonggi Culture Foundation (in Gyeonggi Province) has supported art and disability since the mid-00s, an important influence on research into the disability art movement.

Key institutions and organisations in the disability arts sector nationally include the Federation of Disability Culture & Art Associations of Korea. The Federation is essentially a national union of disabled art groups working across all main art forms. The associations hold their A+festivals in central Seoul every year.

While the Federation’s activities are important, Won thinks that small art groups will increasingly set the disability cultural agenda in future. He cites examples such as theatre company, 애인(Aeen), who won acclaim for adapting Samuel Beckett’s Waiting for Godot. The adaptation innovated through actors with cerebral palsy expressing the mood of Godot by using their vocal characteristics and gestures.

In 2015, the production won awards at the Miryang Theater Festival, an important opportunity for Korean theatre companies teams to compete for audiences in public. Project-based theatre company, 0set (zero set), also supported by the Seoul Culture Foundation, recently made a piece called ‘I Am Human/Flying Human,’ a collaboration with 애인(Aeen) featuring the non-disabled actor Sung Soo-hyun, and disabled actress Moon Young-min. In the show, actors share their physical experiences with the audience and pose questions about walking and not walking. Moon Young-min uses a wheelchair and is deaf.

Dance is popular too. Korea International Accessible Dance Festival (KIADA) funded by the Ministry of Culture Sports and Tourism (MCST) has been held in Seoul for three years and attracts dance companies internationally. Recent participants have come from Europe, the United States, Japan and Taiwan.

Artists involved in the Sync programme included several artists whose practice has been supported by Jamsil Creative Studio funded by the Seoul Cultural Foundation. The Seoul Metropolitan Government provides creative spaces to disabled artists in the Studio, and in addition, some arts education. A key facet of the Studio is that many young artists resident there have never won any public funding before. Minhee Lee first worked at Jamsil in 2015, and her practice includes photography and dance informed by her cerebral palsy. She participated in the KIADA solo festival in Seoul, and has shown in several photography exhibitions.

Big challenges still exist: Won asserts Korean government funding is still not sufficient for the task of developing disability art forms nationally and funding structures and methods leave a lot to be desired. Just like in the UK, individual artists struggle to get public funding even if qualified and experienced. Another problem is that South Korea is isolated in terms of language and geography. Won insists Korean disabled artists make high quality work, but finding collaborations in other countries and cultures is difficult because of the geographic dislocation of other disabled arts communities regionally.

Won thinks to achieve a state of richer artistic creation based on the artist’s disabled identity, disabled artists need to be part of networks of people with the same, or different disability identities. But the geography of Korea intervenes; disabled communities can only interact with small numbers of disabled people who speak Korean living in the southern half of the Korean peninsula. Of course, in the globalised world, some non-disabled artists in Korea might not have many problems with geography and language. But there are big challenges with isolation for disabled people, who tend to have trouble with accessing education, finance, and travelling abroad.

Overcoming this geographic and linguistic isolation, Won hopes the international community will give Korean artists more opportunities, but he’s really keen to insist it’ll be a two-way exchange, with Korean disabled artists of all kinds sharing their distinctive creativity and narrative with disabled communities around the world.

What grounds are there to be optimistic about further development of the disability arts movement across Korea? According to Won, the Korean government is currently led by progressive groups who have a good record in assuring minority human rights, as seen in recent cultural and artistic policy and legislative progress. Pulling the other way, however, the artist sees the deteriorating Korean economy as a potential hazard to progress and development for the sector. 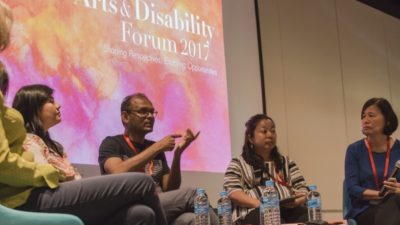 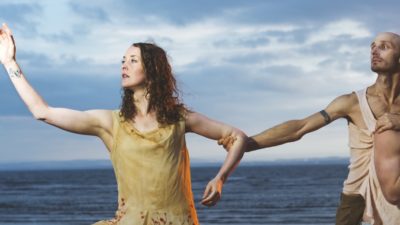