Visually this film is a mixture of to-camera interview footage with Madeleine Månsson interspersed with Madeleine performing in various productions and rehearsing. Madeleine is a white, wheelchair-using woman in her 30s with shoulder-length blonde hair.

The film opens with Madeleine performing a duet with another dancer. She is leaning backwards on her shoulders, the other dancer is resting their feet on the wheels of her chair and supporting themselves with their head on the ground. The camera cuts quickly between scenes of Madeleine navigating her way through an urban environment. Then a still of her performing alongside a company of other dancers, they are all dressed in formal white clothing.

Madeleine says: “My name is Madeleine Månsson
and I’m a dancer and choreographer. And I come from Malmö, Sweden, from Skånes Dance Theater.” The camera shows Madeleine being interviewed in a rehearsal room, then cuts to her performing. She is being pushed around by another female dancer, with dark hair in a ponytail, as Madeleine balances on her wheels.

The camera cuts back to Madeleine in the rehearsal room, as she says: “I came across contemporary dance in 2012, through my previous job, actually. I’m a social worker and I had a project where I was working with young girls and women with different disabilities. And in 2012 Skånes Dance Theater wrote me asking:
‘Do you have someone in your group that would like to try contemporary dance?’ And I said: “Yes, I can pass this question on and see”.

We see Madeleine amongst a group of other dancers from Skånes Dansteater performing Ben Wright’s double-bill ‘Belonging’. They are all dressed in white and interacting elegantly. Madeleine continues: “There were two women that wanted to try and I also felt that I needed to be a role model to the others, so, I also stepped in to try. And it was the first time ever I tried contemporary dance.

We see Madeleine performing a duet with a male dancer, who pulls her to the ground and then her rehearsing solo, moving freely in her chair.

Madeleine then says: “Uncharted is a part of Europe Beyond Access. We are going to choose three spots in Malmö and basically going to dig deep into these spaces and create a choreography with these spaces. So, it will be a challenge of ‘who we normally see in these spaces?’ To challenge unexpected bodies in unexpected places. So, it will be three spots and three different
choreographies on these spots. We see Madeleine rehearsing with several other dancers for Uncharted, in outdoor, urban environments.

Next we see Madeleine navigating a skatepark with her wheelchair. She says: “It is something special using your body as a tool in your work, also your mind and imagination, but especially for me, it’s with my body. I have always been quite physical, I have done a lot of sports before, so, I have always liked to push myself physically.”

The camera cuts back to Madeleine’s duet with the white, male bald dancer. They are performing in an ex-industrial space with a parge blue pipe which they interact with. Madeleine says: “Something I discovered here in contemporary dance is that we also really push our minds somehow, especially in the creative process. And that is something that I really like: to constantly step over these comfort zones.”

We then see Madeleine and other dancers in rehearsals for a show called Belonging, which has lots of chairs lined up in a grid pattern. Madeleine says: “Also, my physical barriers, so, there are a lot of things that in an individual personal way, in dance, that makes me grow. So, that is why I really love it. And obviously also because there is a lot of meeting with people in this work.” The camera cuts to Madeleine sitting on a sofa outside in an urban environment. The credits roll, followed by the end title with project and partner logos. 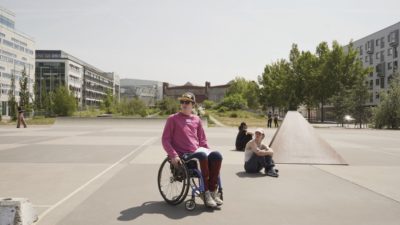 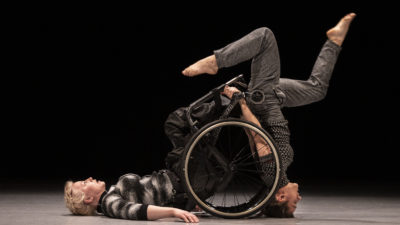 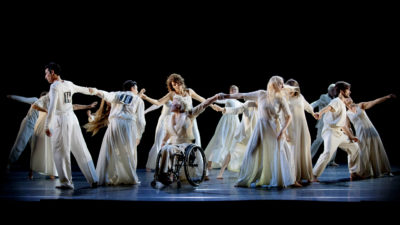