IntegrART is a Swiss-based initiative established in 2007 by Migros Culture Percentage as a means of integrating disabled people within the arts. It hosts a biennial symposium with discussions and performances. British arts journalist, Bella Todd attended the 2017 incarnation, and here assesses the performances.

A figure sits at the top of a spiral stair, folding paper planes. Her head is covered with a paper bag, and she wears a red gown so long it winds down four flights of steps and out into the foyer of the Tanzhaus Zürich, where guests are just arriving for the 2017 IntegrART symposium. As the delegates climb the stairs to the toilets, or make their way to the main auditorium, they assume they are walking on a slightly incongruous red carpet. Then a paper plane nosedives past, turning heads, and they realise they’ve been walking all over the opening performance.

Noëmi Lakmaier’s durational, site-specific piece, You Are Welcome, premiered in Cardiff last year. Its re-emergence at this three-day symposium on the theme of ‘Politics and Bodies: Reflecting the current trend to present dissident bodies on stage’ feels playfully provocative. Zurich’s IntegrART funds four integrative local arts festivals and tours international productions. But its biennial symposium, very much in the Germanic tradition, is in large part about giving the floor to the academics. It’s a curious experience for a visitor from the UK, where a diverse arts sector isn’t so dependent on the academic seal of approval, and where the agency and autonomy of disabled artists is currently high on the agenda. Three and a half hours into the discussions, Lakmaier still sits folding. Occasionally there is a brief pause as the artist shifts her legs into a more comfortable position with her hands. Then she sighs, takes the top sheet of A4 from the stack on her lap, and starts to press another paper plane.

Like the other piece Lakmaier performs at the festival – ThreeDoubleFourTwo, in which the artist inflates balloons to bursting point while the delegates try not to drop their morning croissants and coffee – You Are Welcome operates from the peripheries. Patiently and painstakingly, it disrupts and enlivens our commonplace perceptions. Informed by Lakmaier’s many different experiences of being the ‘other’, it is enriched by, but never thematically confined to, the artist’s disability.

By contrast, Alessandro Schiattarella’s solo dance piece Tell Me Where It Is – IntegrART’s headline performance – is built for the centre stage and decisively rooted in the choreographer’s personal experience of disability. Schiattarella is an Italian dancer and choreographer based in Switzerland, whose ballet career has taken in several renowned companies. As a young adult, he was diagnosed with Hirayama disease, a rare neuromuscular condition affecting his arms and hands. This full-length solo piece marks his ‘coming out’ as a disabled dancer, and was made with the encouragement and coaching of Glaswegian dancer and crutch-user Claire Cunningham.

For the opening few minutes of Tell Me Where It Is, I’m reminded of Icelandic theatre company Vesturport’s very physical take on Kafka’s Metamorphosis. Schiattarella feels his way creature-like along the stage side. His muscled body is tight to the wall as if seeking camouflage. He strains for openings and footholds, and eventually resorts to tunnelling under the stage’s floor mat, emerging panting through a rip in the fabric. Having burrowed his way stage centre, Schiattarella performs for a while with just his hands and forearms. Sometimes they attack each other. Sometimes they whirl round in a liberated blur of lightened flesh.

At the climax, Schiattarella’s semi-naked form is silhouetted on the walls by four different spotlights. He rotates slowly and carefully, watching as the light catches and emphasises the contours of his arms. In one aspect the silhouette is mythically powerful, like an Oscar statuette or a Greek ancient freshly shaped from clay. In a second, it appears fragile and shrunken. Further lights and movements blur the two impressions. Tragic figure or super-crip? Schiattarella is having none of these crude polarities. Most powerfully of all, his body becomes a subject for enrapt self-contemplation, rather than an object of the audience’s stare.

The opposite effect is created the following morning by an open rehearsal for Swiss learning-disabled company Theater HORA. The rehearsal is already underway as we file in from a pompous debate on disability and post-dramatic theatre. There is viewing space for only 50 – the rest of the spectators can watch via a video link. In a break from all other events, there is also no translation, so many can’t understand the instructions the performers give to each other via a loudhailer. The open rehearsal is billed as a chance to witness the subversion of traditional theatre hierarchies through an experiment in group direction. But it feels split off and shut out from the main programme. I watch a performer run around naked and throw his shoes, and feel as if I’m not in the theatre but spying through glass.

If only this othering experience had been offset by a more inspirational offering from the DisAbility on Stage research project. This stage laboratory sees disabled performers collaborate with dance students from Zurich University of the Arts. For two weeks, they worked with leading Israeli choreographer Emanuel Gat, a past collaborator with integrated company Candoco Dance. But I feel as though I’m watching the disabled performers being integrated into an existing dance, moving in the slipstream of the glossily ponytailed students, rather than being given space to develop their individual styles. The dancer with Down’s syndrome, gently grooving out of time to Kenny Loggins’s ‘Footloose’, deserves a choreography in which her physicality is a guiding force, not the stylistic counterweight.

Throughout the symposium, a line from Claire Cunningham’s Guide Gods keeps coming to mind. In that show, one of Cunningham’s recorded interviewees describes society’s attitude to disabled people as a kind of ‘inhospitable hospitality’. This seems to be one of the insights offered by Lakmaier, performing for us at the top of a stair she can’t climb, and Schiattarella, as he camouflages and tunnels his way to the centre of the stage. Unfortunately, it is also an inadvertent impression given by the cooptive choreography of DisAbility on Stage and the problematic management of Theater HORA’s involvement in the symposium. It’s a shame, because occasions such as these have the opportunity to offer exactly the opposite of society’s ‘inhospitable hospitality’: a warm and practicable invitation to co-explore some thorny but fascinating theoretical terrain. 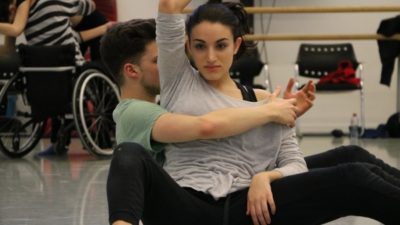 IntegrART 2017: the relationship between art, politics and disabled bodies 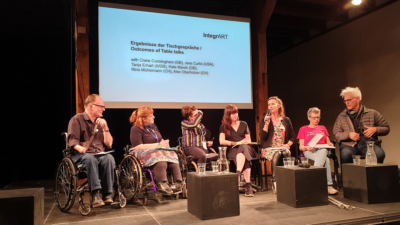 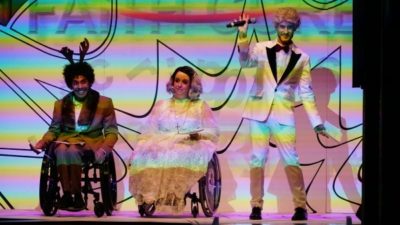 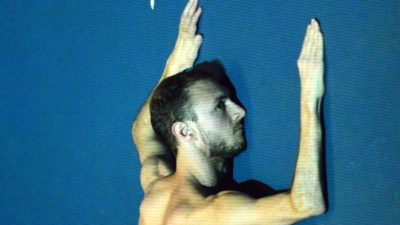