Part of Europe Beyond Access is about building public interest in disabled artists’ work through audience education and taste cultivation.

This article (first published in Greek on online magazine, monopoli.gr) outlines how our partner in Athens, Onassis STEGI, has been raising awareness around the aesthetic value of performance led by and featuring disabled performers and different ways in which audiences can engage in interpretation.

Onassis Stegi organized four audience development seminars between December 2019 and March 2020. These workshops, each focusing on a different performance, comprised three two-hour meetings held in series. The seminars were led by three acclaimed choreographers: two by Medie Megas, one by Iris Karayan, and one by Maria Koliopoulou. The first seminar centered on the work “Elenit” by Euripides Laskaridis, the second on “Practical Encyclopedia. Detours” (sic) by Lenio Kaklea, the third on “Re-call” by Venetsiana Kalampaliki, and the fourth on “Enter Achilles” by Lloyd Newson (DV8). These seminars were designed to be taken by professional and amateur dance artists, dramaturgs, critics, and journalists, both disabled and non-disabled. I was lucky enough to attend the final three of these seminars.

The aim of each audience development workshop series – as promised in the name – was to strengthen participants’ powers of perception by cultivating certain tools for viewing works. These tools were not limiting in nature, enforcing particular interpretative approaches for example, or narrowly defining the ways in which one connects with each performance. On the contrary, they created an open and accepting framework that highlighted viewing possibilities over all else, drawing on the experiences of each participant. Fittingly, this occurred experientially through the artistic process.

The first seminar opened with a discussion on techniques of the body and the notion of practice, in line with the leaflet that accompanied Kaklea’s performance. Techniques of the body – “that is, the ways in which people in each society traditionally use their bodies” – was first introduced as an idea by the anthropologist Marcel Mauss in 1934, and was developed in various directions by philosophers such as Michel Foucault, feminist academics such as Judith Butler, and sociologists such as Erving Goffman, Pierre Bourdieu, and Michel de Certeau. In choreography, which is mainly manifested through the body, the appearance of such practices can occur through the use of gesture.

The descriptive particularities of mimesis, which gesture perhaps bears, is sometimes judged negatively in contemporary art. Kaklea overcomes this hurdle in her work – as does Karayan in her workshop – by introducing the concept of form. The image of a body throwing a ball to a dog (to take an example from the performance that was also used as part of the workshop) brings with it an inescapable set of straightforward associations. The act itself – in this case, the throwing of a ball – was subsequently broken down, repeated, stripped of its distinctive elements and, at the same time, multiplied across the various bodies present at the workshop, across people of differing ages, both disabled and non-disabled, both trained and untrained in dance.

In addition to Kaklea’s performance, Jonathan Burrows’ “52 Portraits” were also used to stimulate and inspire the choreographic creation process. In these 52 portraits, people from the dance world – deaf artist Chisato Minamimura among them – present a very short solo or duet, rendering an open but delineated topic by means of an unconstrained movement vocabulary within a highly specified form. This form, which Burrows draws from the structure of old music phrases, was proposed as the delimiting factor of the seminar’s compositional piece. The workshop saw different bodies working together and in parallel to present a duet at its end. The movement materials presented within these duets were derived from autobiographical elements that the participants shared with each other in private conversations.

In this way, the choreography was deconstructed into a creative process comprising the following:

This deconstruction – artistically open and interesting, yet at the same time feasible, and enjoyable to do – emerged not as the result of some uncompromising and demanding technical education process that produces similar kinds of bodies, but rather by respecting difference, and investing in it artistically.

As Bojana Kunst notes in her article “The Voice of the Dancing Body” (2009), contemporary dance is “contemporary” precisely because it turns its attention to the very materials of the body and connects with this materiality, through observation: of movement and the rhythm of the breath, of gravity and resistance to this force, of suspension and falling, of displacement and silence, and of the shapes the body takes in space. Indeed, contemporary dance classes, even purely technical ones, bear this process out. The teaching of choreographic combinations usually concerns a conscious awareness of weight, motion, and torsion, or the ways in which a movement differs – both in terms of the impression it leaves, and its resultant image – when it springs each time from a different part of the body.

The deployment of this constantly alert awareness of one’s physicality works concurrently on two levels. It cultivates the body of the performer, and at the same time develops their abilities as a spectator. The notion of kinesthetic empathy, which Koliopoulou selected as her core concept, emerged in support of modern dance in the early 20th century and, in updated forms, remains an important tool in contemporary theoretical and practical approaches to dance.

Given that it cultivates a powerful sense of one’s presence, this choice allowed the participants to attain a finely tuned performative body, not through some specified and demanding technique, but by drawing from the realities of bodily experience itself. Other ideas were added to this practice: instructions regarding specific actions – such as jump, fall, stop, and move – and the consideration of elements such as lighting, music, the space itself, and so on, as having equal influence on the dramaturgy. The performance that followed this third workshop – “Re-call” (working title) by the young choreographer Venetsiana Kalampaliki – was also discussed along these same lines, given that it focused on the personal experiences and lived histories of two disabled performers.

The duets created as part of this workshop made use of tools of various kinds: kinesthetic, “decision / action” as an applied form of testing and experimentation, and the recall of experience and presence – a presence that does not simply accept the potential creative powers of difference borne by the histories and experiences of each body, but rather invests in these, transforming them into choreographic and compositional tools.

The final workshop, led by Medie Megas, focused on the work “Enter Achilles” by Lloyd Newson (DV8). “Enter Achilles” is an intensely theatrical performance. It was first presented in 1995, at a time when the crisis of masculinity seems to have been a favoured topic of discussion in the UK (see also “Trainspotting”). In this DV8 piece, masculinity occurs as an embodied reality borne by the material bodies of eight dancers, but is also revealed as a kind of theatrical representation in the process. At the same time, masculinity is also reflected upon through the intermediary spaces created by all of the above.

Two more words complete the full name of Lloyd Newson’s company: DV8 Physical Theater. Physicality and theatricality provide a fairly precise description of the ways in which this particular work constructs channels of communication with its audience. And it was these two notions that Medie Megas chose to work with too.

The notion of theatricality was first analyzed not as a kind of scenic material, but rather as an element of everyday life. A discussion of societal gender stereotypes revealed the concept of their performance, in accordance with the demands stipulated historically by each society. In order to reveal the historicity of this construct, Megas opened up a broader discussion through the use of photographic materials documenting different time periods. The workshop meetings became a wellspring of deliberation as regards the admission that we perform not only masculinity and femininity, but also our entire selves in our everyday lives, as noted by Goffman. Spectators and performers’ experiences of the body – both personal and collective – are thus re-examined in reflexive terms. The broadening of the ways in which this occurs, and their subsequent re-enactment by the body as habit and gesture, motion and locomotion, reveals the possibilities they bear as choreographic materials.

In this way, the choreography took place and was analyzed within the framework of the workshop as a practice that invests in recognition exploratively, beyond our direct, unfiltered first responses. It is an instance of recognition in which certainties and contradictions enter into dialogue and highlight intermediary poetic spaces.

The effect of naturalness / materiality was approached in a similar fashion. In this performance, the power of the eight dancers, their very presence, the literality of these vibrating bodies, their leaps and synchronicity, their acrobatics and energetic choreography, their tangibly vibrant dancing went beyond the representation of masculinity, over and above its mere depiction, to be transformed into a universe.

Similarly, in the workshop, the different materialities of the bodies present – as regards to impairment and level of dance training, and so on – and the innate possibilities they bring were engaged with literally, and as an asset.

The bodies in the workshop were not pressured to produce a homogenised result rooted in some generally accepted dance aesthetic that only allows for toned, flexible bodies. On the contrary, they brought forth their difference as an advantage that allows a certain hybridity to be placed front and centre.

Common to all three workshop series was the presentation of, and exposure to choreographic tools in contemporary, current, and artistically demanding ways. Beyond the familiarity that grew between people who were initially strangers (as is inescapable for programmes with multiple meetings), and the mingling of disabled and non-disabled participants, the most important feeling engendered by the seminars was their indisputable artistic imperative, reconciling difference on equal terms, rather than assimilating difference.

It is a co-existence of differing elements that not only accepts difference – seeking to heighten its visibility – but also uses it as an asset to produce potentially poetic acts. It is other bodies moving in other charming ways. Indeed, one of the important points of dance as an art form is to exhaust the possibilities of bodily presence and movement, to discover new embodied ways of being on stage. The history of choreography was built on the foundations of experiments to this end, posing such questions as: How can different dance traditions co-exist? How is a body’s movement changed when faced with a wall, a uniform, a mass of clay, a trampoline, a knotted piece of rope, or the use of sedative drugs? How (more recently) do digital and material worlds intertwine? And in the end, artistically speaking, what do these all create?

It is a sustained exploration of the possibilities offered up by a kind of hybridity, one that highlights the poetry of intermediary spaces and is perfectly matched to the art of a new century still in flux. There is something current, urgent, and contemporary about this approach. And as such, it is important that it be engaged with in this way by everyone.

When one realises that an “able-bodied” requirement preventing disabled undergraduate students from attending drama schools certified by the Greek Ministry of Culture was only struck from Hellenic Presidential Decree 370/1983 (article 8/c) in 2017, then it becomes abundantly clear that meetings such as these are not just important – they are absolutely necessary. 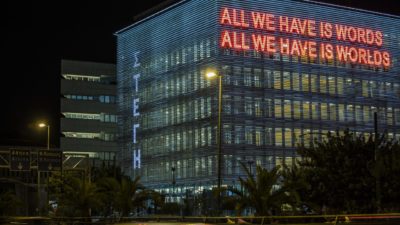 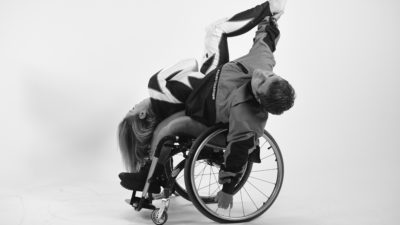 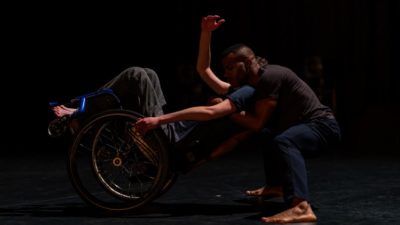 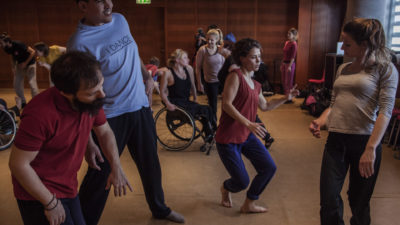