Jonathan Meth on Crossing the Line

Crossing the Line’s Project Dramaturg, Jonathan Meth, speaks about the significance of bringing together three learning disabled theatre companies from across Europe, and the fascinating conversations that arose.

Why ‘Crossing the Line’?

“There’s a frontier or border you have to cross to work transnationally. Euphemistically, if you’re crossing a line you’re doing something a bit naughty, a bit forbidden – and if you’re working with learning disabled artists you’re constantly doing that in terms of the mainstream aesthetic. It’s also a reference from shot rhetoric in the film world. If you want to disrupt the spectator’s understanding of what they’re seeing, then you do cross the line. So it’s about encounter, movement, difference, and doing something a bit edgy.”

What is so significant about this project?

“The three companies involved have all been making learning disabled theatre for 35-40 years. They’re at the top of their game. This is the first international collaboration involving this level of expertise yet such differences of approach. The Crossing the Line festival has grown out of a two-year project. It’s not just about the shows. It’s about understanding how they come about, from workshops giving insight into the processes, to round tables that go into wider contextual issues around European collaborative working and disability aesthetics – not particularly a phrase that’s embraced by all the countries. It’s an opportunity for the different teams of artists to spend time getting to meet their peers, seeing the work, scrutinising the work – to challenge yourself, calibrate yourself, celebrate yourself.”

How differently is learning disabled theatre produced in France, Sweden and England?

“Part of the companies’ journeys has been taking this opportunity to connect with how other countries are negotiating their own systems and structures through a different historical-political lens. My sense of the way France structures its arts provision is that it likes to have one of everything which is excellent. This is L’Oiseau Mouche: the best when it comes to learning disabled theatre. Because of that, in a way the company jumps over a lot of debates that the UK would be having about disability arts. They work bloody hard to make sure that position is maintained. But when they rock up on the circuit with a show, it’s just down to taste, economics and logistics as to whether or not it gets put on.

In the UK, we’ve had a 40 year-plus battle to get to the point where we can demand to be artistically engaged with and led. We also work in a mixed economy. You’re obliged to be creative in how you access resources. You combine training, education and learning with employment, and then you find routes to money however you can. In Sweden, Moomsteatern’s director Per Törnqvist made the decision to declare, ‘we are a theatre company, we make theatre’, and to reject money that comes from social services, education or health. At a national level, they are understood as a Swedish cultural asset because they don’t go the social route. But a certain amount of chutzpah is also involved. When they worked with Slovenian partners, Moomsteatern found a way of commandeering the Swedish military airforce into flying them out there. In all these structures you’ve also got to have charismatic, canny, resourceful and visionary individuals to really make a change.”

What are the national conversations around disability aesthetics?

“In France, ‘laïcité’ is the blanket cloak that creates the paradox where, ‘we’re all French, that’s it’. It’s the myth of homogenising. And you can see why, because in theory it’s the place you want to get to. But in fact, curating diversity is the task at hand. The fact the French team didn’t take part in the informal round table on disability aesthetics – although there were associates who contributed really well in the audience – says a lot. Formally, they just don’t go there.

The challenge for Moomsteatern, which Per talks about, is getting over this response of, ‘aren’t these people fantastic?’ That whole ‘I piss on your pity’ thing: a need to get beyond the tragic and brave narratives. In the UK, Matt Hargrave has written the first serious academic book [Theatres of Learning Disability, Palgrave Macmillan, 2015] that I think tries to inhabit some of those complicated paradoxes around disabled people being both invisible and hyper visible – and not pretend that only one part of that might be at any point true.”

What audiences do these companies cultivate?

“For the uninitiated Roubaix might seem like a suburb of Lille. But it’s a very specific place, and there’s a reason why it’s twinned with Bradford. You see its former richness, as a centre of wool, these wonderful buildings falling into decrepitude or being repurposed as theatres. There’s a high Muslim population. L’Oiseau Mouche are especially looking at how they build links with different sections of the community, and artists are central to that process. They run two restaurants as part of their business and training model and as a strategy for drawing different people in, and also curate work that comes into the space. In Sweden, because of the socially minded way they do things, and because Moomstearten is housed within an old community building, you might find Syrian and Kurdish community groups in the audience.”

How accessible is the work showcased at the festival to learning disabled audiences?

“There’s a really interesting relationship between the dramaturgy of translation and how you make work accessible. I would say that you have to surrender to a piece like Moomsteatern’s [a version of Strindberg’s A Dream Play in the original Swedish]. If you fight it, you’re screwed. And I don’t think that necessarily learning disabled people have a problem with that, because I don’t think they’re necessarily as driven to make sense with that part of their brain.

What happens if you go to watch a piece of theatre in a language you fundamentally don’t understand? First of all there’s a struggle to use the bit of your mind you usually use. Then you get a bit pissed off. Then you get a bit bored. Then you either zone out or something more interesting happens: the normal way you watch shuts down and creates a space for something else to happen. So on that basis, as long as you make sure that anyone who comes to the theatre is absolutely welcome – if you make a noise or move around no problem, because we’re not in church – then who’s to say, in the end, what anyone is going to make of what they see there?”

What can you tell us about the next phase, Crossing the Line 2.0?

“We’ve applied for large corporation project funding from Creative Europe. This would offer €2million on a 50/50 split, so we would bring €2million to the table as well to run a €4million project over four years. This allows us to include four new companies: Blue Teapot from Ireland, Hijinx from Wales, 21 Theater from Poland and Rotterdams Centrum voor Theater from the Netherlands, as well as associate partners from Brussels, Italy and Spain. We now have the creative wherewithal to start a longer process. We’ve done the groundwork. When Alan Lyddiard of Mind the Gap says he’d love all the countries to come and do a show together… well, it’s meaningful now.” 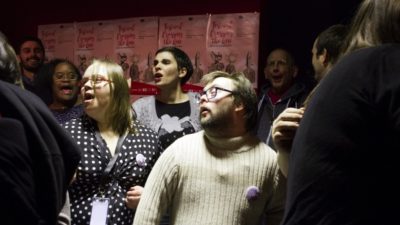 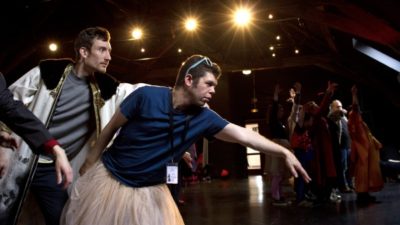 Crossing the Line: an introduction 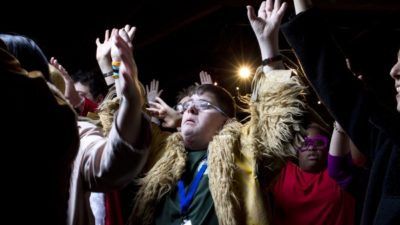 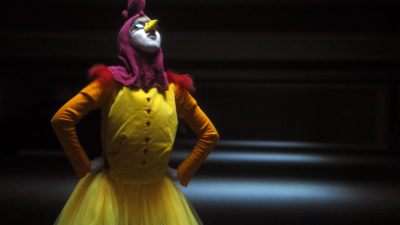 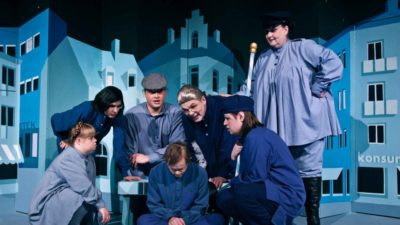